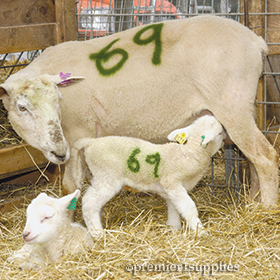 Lambs need to start off on the right foot—which means getting the right amount of colostrum at the right time.

When raising sheep and goats (and other livestock), the importance of high quality colostrum cannot be over-emphasized. Colostrum is so important that sometimes it is called “liquid gold.”

All mammals produce colostrum. It is the thick, yellowish “first milk” that is produced by the female after she gives birth (parturition). Colostrum is rich in energy, protein, vitamins and minerals. Most importantly, it contains maternal antibodies that help protect the newborn from disease pathogens during the early part of its life. Ewes and does only produce colostrum for about 24 hours (plus or minus a few hours) after delivering their offspring.

The type of antibodies the colostrum contains depends upon the antigens to which the dam was exposed to (by disease exposure or vaccination). Ewes and does should be vaccinated in late pregnancy for overeating disease (clostridium perfringens type C & D) and tetanus (clostridium tetani) so that they will pass antibodies for these diseases to their offspring via the colostrum.

Pregnant females should be kept in the location where they are going to lamb or kid for at least 14 days prior to parturition. This gives them time to manufacture the correct antibodies for their specific lambing and kidding environment. 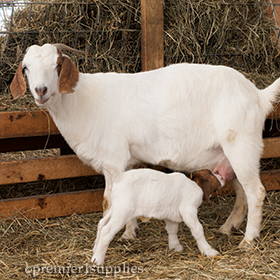 Goat colostrum can be substituted for sheep colostrum if the dam is unable to produce adequate amounts.

All newborn mammals need colostrum. While it is possible for a lamb or kid to survive without colostrum in a relatively disease-free environment, the likelihood of disease and death is much higher in lambs and kids that do not receive adequate colostrum. Orphan lambs and kids are often more susceptible to diarrhea and pneumonia because they did not consume enough high quality colostrum.

Newborn lambs and kids have limited energy reserves and need rapid access to colostrum to maintain body temperature and survive, especially those born when it is cold. Lambs are born with low vitamin A reserves. Colostrum is usually rich in vitamin A and helps to build stores in the newborn.

Colostrum is also the first source of Vitamin E for the lamb or kid. The iron content of colostrum is 10 to 17 times higher in colostrum than normal milk. Colostrum also has laxative qualities and helps to eliminate fecal matter in the newborn’s digestive tract.

In most underfed ewes, the lambs’ needs for colostrum often exceed the ewe’s production whereas females which are well-fed in late pregnancy usually produce more than their babies need. At the same time, Oregon researchers found no differences in the amount and quality of colostrum produced by ewes with body condition scores ranging from 2.5 to 3.5.

Lambs and kids should nurse as soon after birth as possible in order to receive adequate colostrum. After parturition, it is a good idea to strip each teat to remove the wax plug and make sure the ewe or doe has enough colostrum to feed her offspring. Antibodies are large protein molecules that can only cross the intestinal wall and enter the bloodstream of the lamb during the first 24 to 36 hours of life. Absorption is most efficient the first few hours after birth. 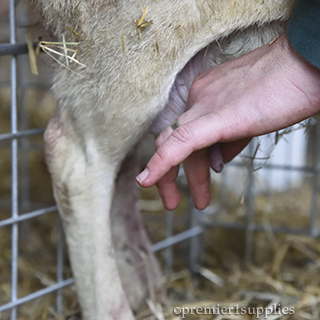 Stripping the teats of udders removes the wax plug that may have formed.

High quality colostrum contains 50 mg or more of immunoglobulin-G (IgG). The concentration of immunoglobulins in colostrum decreases rapidly after parturition. An Oregon study showed that IgG concentration in ewe’s milk diminished to zero by 23 hours postpartum. Therefore, the sooner colostrum is consumed, the better. Thirty minutes is considered optimum whereas 18 hours is considered a must.

Lambs and kids that are too weak to nurse can be fed colostrum with a nippled bottle or stomach tube. It is recommended that lambs receive 10 percent of their weight in colostrum by the time they are 24 hours old. This means that a 10 pound lamb should receive one pound (16 ounces) of colostrum within 24 hours of birth. Colostrum should be fed at blood temperature (102-103°F, 39-40°C), 2 to 4 ounces at 3 to 4 hour intervals. A 60 cc syringe holds 2 ounces of colostrum. 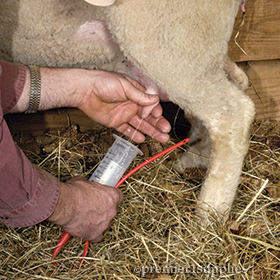 Milk directly in the 160cc syringe. We keep the tube attached, but pointed upward to prevent milk from draining out. 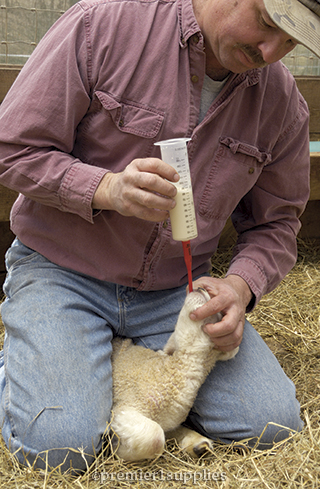 With plunger in the syringe (to hold milkf flow), guide the tube down the lamb/kids throat and into the stomach. Remove plunge and allow colostrum to flow via gravity.

It is always a good idea to milk out ewes and does that have extra milk (colostrum) and to freeze it for later use. Females which give birth to singles often have enough colostrum for a second offspring. You can milk ewes and does out by hand or use a colostrum collection device, e.g. Udderly EZ™. 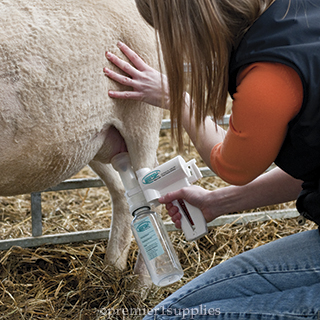 A ewe being milked with an Udderly EZ hand unit. Requires minimal strength and the milk is secure in the container.

Cow colostrum can serve as a substitute for lamb and goat colostrum, but because cow’s milk is not as nutritious as ewe’s milk, more volume (about one third) must be fed to lambs. Milk from the colored breeds is better because it is higher in fat. Though Johne’s disease is not as common in sheep and goats as it is in cattle, it is advisable to get cow colostrum from a herd that has tested negative for Johne’s.

Frozen colostrum should be thawed slowly in a warm water bath. Do not use direct heat or this will destroy the antibodies. A microwave can be used to thaw colostrum if it is heated for short periods of time on low power.

Frozen colostrum can be stored for up to 12 months. A study conducted in 2001 by the University of Tennessee showed that the freezing and thawing of colostrum did not destroy the components in the milk which provide resistance to E. coli challenge in newborn lambs. Colostrum can be refrigerated for one week before quality (IgG concentration) declines.

It’s important not to confuse colostrum “supplements” with colostrum replacements or substitutes. Be sure to read the labels carefully. A colostrum product that is unable to raise the blood concentration of IgG above the species standard is called a colostrum supplement.

Colostrum supplements are nutritious and can be used to increase the amount of IgG fed when no other source of colostrum is available, but they cannot replace high quality colostrum. They do not contain sufficient quantities of antibodies. They are often marketed as colostrum replacements, which they are not. A Spanish study concluded that kids receiving a commercial colostrum did not acquire the necessary immunity as compared to kids consuming fresh sheep and frozen goat colostrum.

Lamb or kid milk replacer is never a substitute for colostrum. It should not be fed until the lamb or kid has received adequate colostrum, usually over 24 hours of age.

Diseases transmitted in the colostrum
Some diseases are transferred from the dam to the offspring via the colostrum and milk. Both Ovine Progressive Pneumonia (OPP) and Caprine Arthritic Encephalitis (CAE) are transmitted in this manner. These diseases are very similar and can be transferred between species. A lamb that consumes colostrum from a CAE-positive doe can test positive for OPP and a kid that consume colostrum from a OPP-positive ewe can test positive for CAE.

To prevent the transmission of either disease from positive dams to offspring, the offspring should not be allowed to nurse positive dams. They should be fed pasteurized colostrum or cow colostrum. The bacteria that causes Johne’s disease can also be transmitted through colostrum, though it is not the primary mode of transmission.