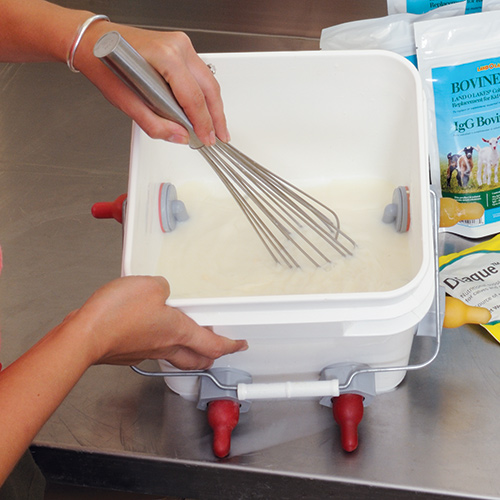 To start, use Pritchard teats with warm artificial milk or colostrum.

After one day switch to latex (red or natural) teats in bucket teat units with at least 2 teat units on them. As soon as they learn to nurse readily, switch to cold milk. Offer it ad lib in the bucket.

Around day 5 offer grain (commercial lamb starter or soybean meal with cracked corn) in a feeder. Place a light (a heat lamp in winter) over the grain. We sprinkle leaves from legume hay over the mixture to encourage intake.

After 2 weeks switch to rubber teats.

By the fifth week their consumption/day will surprise you. So will the milk cost! Begin diluting the milk with water.

Week 6 and after offer only water. Tough love at this point is important!

So, use warm milk for newborns only. Thereafter, cold. Hello, I just wanted to send a huge thank you for the goat/lamb kid bottles that we ordered with the Pritchard version. They are fantastic! We have always used calf bottles in the past as that’s what we have on hand because we also dairy farm … but today one of our goats had triplets and they took to the bottles instantly!