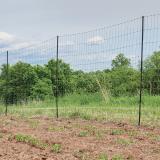 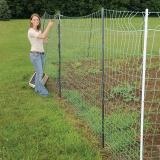 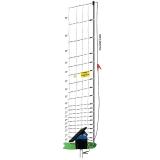 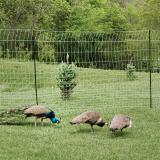 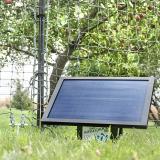 The tallest electric netting we offer (68 inches tall) so it protects gardens, lawns/yards and tree plantings from deer.

Because it's so tall, insulated wire (or cable) is needed to connect the clip (at the top) to the energizer. The normal positive connection from the energizer is too short to reach the top.

These fences have electrified strands close to the ground, so weed/grass control and large energizers are needed to keep the voltage above 3000V.

The same “unroll and then unfold” process applies to all electrified nets. However, this net is heavier and post spikes are larger than our other nets (therefore more difficult to push into the soil). Because the rolls are long and heavy, installation requires 2 people. Extra line posts are usually not necessary but, due to the extra height and weight of this net, extra supports such as 11/16" FiberRods or T Posts are useful at corners, curves and ends. A steel post driver or hammer is needed to install these types of support posts. You will need a fence energizer to electrify the net. This fence, because it has so many energized wires so close to the soil and is intended to stop deer and “furry critters,” is likely to experience high weed contact. Therefore an energizer with a high joule output (preferably a plug-in unit) is best. Monitor the voltage levels. It should be above 2000 volts if the soil is moist and 3500 volts if soil is dry. If not, check the fence for energy leaks. If the fence is near trees, check it after high winds for fallen branches & debris.