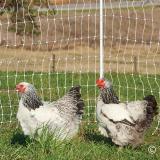 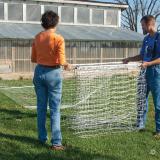 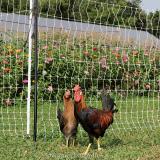 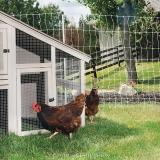 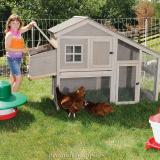 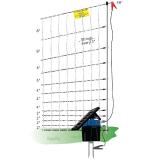 This is a sturdy (and heavy) 48" tall electric netting. We recommend it for locations where the fence will not be moved often or very far. It’s often used as a perimeter fence for chicken yards or to protect gardens from small varmints and deer.

The conductive mesh is identical to 48" PoultryNet® except that it has thicker posts with longer spikes. And its posts are spaced every 6'8" instead of 10'. This means it’s even less likely to sag and enables it to adapt more readily to curves, dips and rises.

Some customers use standard net for a year or two and eventually say, “I like it…but I’d prefer to own more fence and move it less.” We use many rolls of netting for chickens, geese, dogs, sheep and goats on our own farms, and we agree. For this reason, we modified the posts to enable it to remain in place longer. PermaNet is a “less worries” netting option.

Stronger posts—each with larger steel ground spikes—withstand the effects of wind, rain, ice and snow much better than standard netting. However, more posts = more $$/ft and more weight. That’s why the longest length offered is 100 ft.

Arrives to your door as a complete roll with the line posts already built in. Available in white and black (visible for humans and animals against all backgrounds) or green and black (for those who prefer to have the fence blend into the background or landscape).

Like PoultryNet, PermaNet is not effective with baby chicks that are small enough to crawl through the net openings and therefore are not deterred by the electric shock.